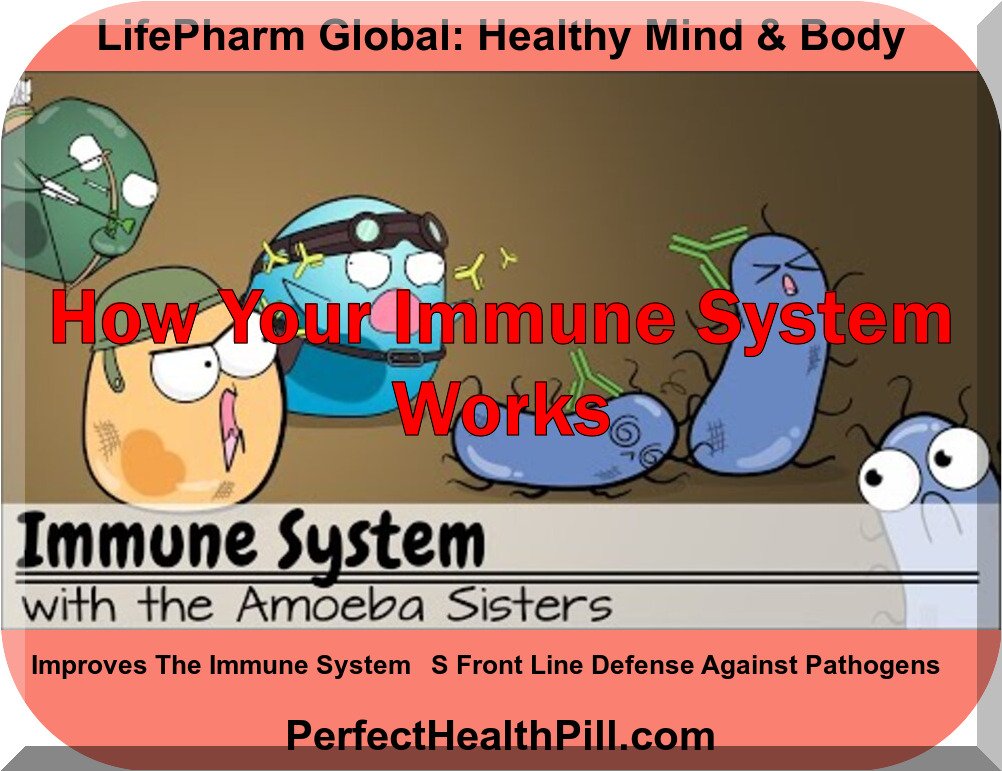 An overview of all of the major body systems is nice, but something remarkable happens when you explore one body system at a time in a bit more depth. And—in our opinion, one of the most fascinating systems of all is the immune system.

Why? Because it features cells in your body that work—day and night—together to protect you from a constant threat of pathogens that are constantly trying to bring mayhem. And most of the time, you don’t even know it. Most of the time. By pathogen, I could mean a lot of things. A line-up: Viruses. Bacteria. Fungi. Protists.

Parasitic worms. We could go on… Your body has external protection against these things. Like your skin. We call that a first line of defense because….it’s the first line against letting these pathogens inside your body. Mucous membranes too, like the lining of your nose, will keep pathogens from getting inside.

This first line of defense is nonspecific, because it’s not selective about what it blocks from getting into your body. But this is all not fool-proof, and sometimes they do get in. And when they do, your immune system has all kinds of ways to deal. After all, this is not its first rodeo.

So let’s say they break through our first line of defense. Well, the 2nd line of defense, includes the inflammatory response. To explain it very simply—let’s say you step on a sharp stick. And there’s some bacteria on that stick. In your foot. The initial damage of this stick into your foot can cause certain types of cells, such as a mast cell, to react.

These cells are filled with substances that work with allergic responses and inflammatory responses too. One substance that they contain is histamine. If they are triggered to release histamine, the result is that this will cause blood vessels to dilate—meaning they widen—near the injury. Histamine also contributes to making these blood vessels leakier. The dilation and the leakiness of the blood vessel makes it easier for many types of white blood cells such as certain types of macrophages to reach the area. And macrophages do what macrophages do best. They consume the pathogens.

Additionally, your body has a complement system. The complement system is not what it sounds like. It basically works to help or complement the actions of the immune system. It can work with non-specific or specific responses. In this situation, the release of complement factors in this case can further attract macrophages to the area to consume pathogens.

When all of this signaling stops, the damaged area can return to normal. The pathogen has been terminated. However, that also was a nonspecific response. Who knows what was on that stick? So that takes us to the 3rd line of defense. The specific line of defense. If you had a cold virus spreading throughout your body, you may need your response to be targeted on that pathogen.

Now, as we give our typical notice, the immune system is very complex. We’ve just been giving some basics, and we’re going to continue to do so, but there are a lot of extra details and exceptions that this short video can’t go into. We encourage you to explore.

Ok so we mentioned, what if we need a more targeted response? We’re moving into something known as adaptive immunity. Sounds fancy, this is a specific response to an antigen. An antigen is something the body recognizes as non-self, and in this case, it is something that would be a part of the pathogen.

This adaptive response is going to be the third line of defense as the first and second line of defense may have not been enough to control the pathogen. We’re going to focus on the basics of two adaptive responses: cell-mediated and humoral. Cell-mediated. This involves the cytotoxic T cell. The cytotoxic T cell is a white blood cell that has the ability to destroy cells that have been infected by the pathogen. It does this by releasing signals that causes the infected cell to do apoptosis, which is a type of self destruct. It can do this releasing a protein called perforin which actually causes holes in the cell membrane. This causes water and ions to flow into it and destroys the cell.

Cytotoxic T cells will be in search of infected cells so they can stop the pathogen, and they will also continue to amplify the immune response. That’s the cell-mediated response, simplified. But remember how we mentioned those Helper T cells? They’re big helpers as they help not only in the cell-mediated response, but they also help in the humoral response. So what happens in the humoral response? In one scenario, a macrophage has consumed a pathogen and once again, has an antigen from the pathogen on its cell membrane surface.

Then, it binds a Helper T Cell. That Helper T Cell could also stimulate a white blood cell known as a B cell. B cells are white blood cells that have the ability to make something called antibodies. Before I define antibody, can we just take a moment and recognize there are three words that sound very similar and can involve the immune system? Antigen which is something that the immune system recognizes as foreign to the body. We’ve been mentioning that one a lot. Antibiotics are substances that can specifically destroy bacteria; we have a separate video on those. But antibodies are something totally different. Antibodies are proteins, and they tend to be in a Y shape.

Antibodies have an antigen binding area where they bind a specific antigen. They will be found in blood but many antibodies can also be found in mucus, saliva, breast milk, and more. There are different classes of antibodies. For example, IgE can protect against parasitic worms. And it’s responsible for a lot of allergic reactions. Antibodies are generally very specific so there must be an antibody that is able to bind to an antigen.

When antibodies bind an antigen, they can deactivate the pathogen by affecting the ability of the pathogen to move, reproduce, or cause harm. The binding can also be like signs telling macrophages, Here it is. Come eat it! So activating B cells causes these antibodies to be produced, and this is part of the humoral response. While B cells can be activated by a T helper cell, they can also be activated by free antigens themselves that they may come in contact with.

Now, we do want to mention that both in the humoral and cell-mediated response, there are memory cells. There are Memory B cells and Memory T cells. These cells keep a memory of the antigen that they were exposed to. Memory B cells can activate Plasma B cells which will make antibodies. Memory T cells can activate cytotoxic T cells which will go after infected cells.

The ability to keep a memory is very important, and this is also where vaccines come in. Vaccines can introduce either an inactivated or very weakened pathogen. This means the body does not get the disease itself, but it will launch an immune response. By launching an immune response, there will ultimately be memory immune cells that will be involved in launching an efficient attack if that pathogen is ever encountered in the future.

Overall, this immune system that you have, it’s pretty incredible. There are entire giant textbooks about this topic alone and careers dedicated to studying it.

Coronavirus is now a possible World Killer. You can help your body resist getting sick by taking Immune+++…

Please Watch the Video Below to View the Complete Discussion.