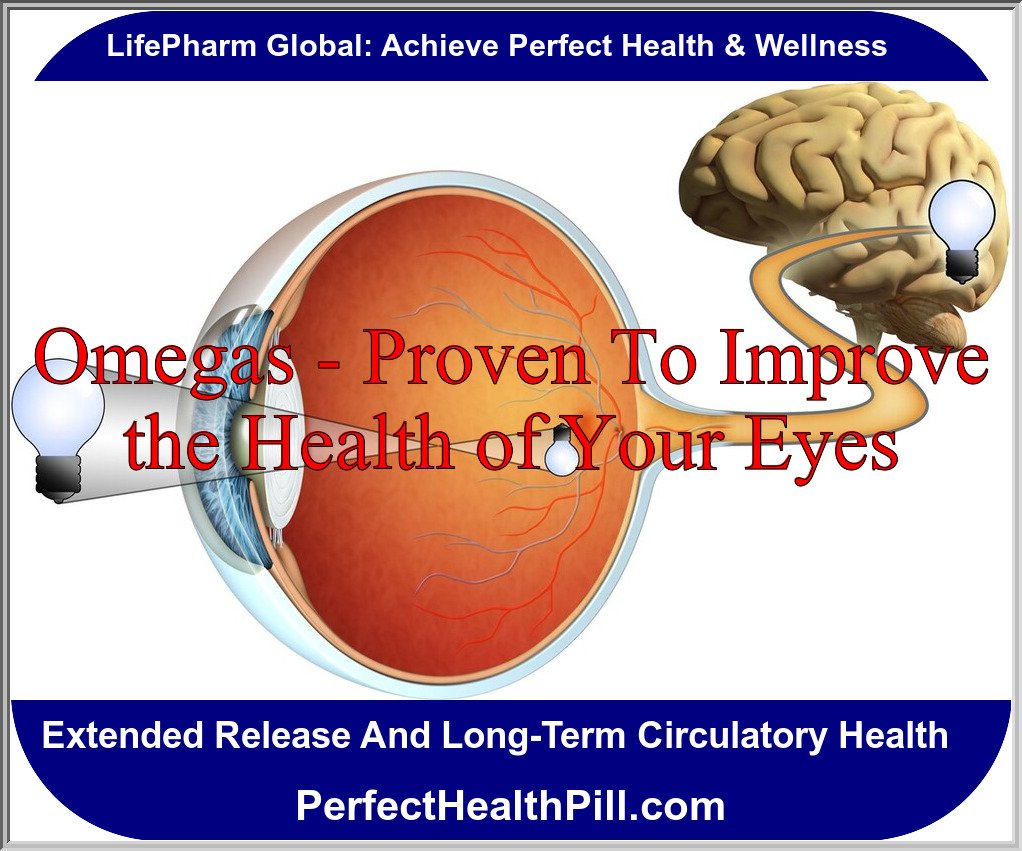 Omega 3 Foods and Healthy fats are essential for the function of cells, muscles, nerves, heart rate, blood clotting, and for the production of compounds that regulate blood pressure. Eye health also depends on proper dietary fats. The large optic nerve behind the retina relays signals from the eye to the brain so we can see clearly. Nerves are huge, elongated cells composed of membranes made of essential fatty acids.

The omega fatty acids such as EPA and DHA as in OMEGA+++ must be obtained through our diets or supplementation because our bodies do not produce them.

In a publication from 2015 , Dr. R. Bhargava of the Laser Eye Clinic in Noida, India explained that the growing use of personal computers has led to an increase in dry eye symptoms in young and middle-aged people, and individuals that have office jobs and that Omega 3 Fish Oil helps. This symptom was mainly observed in elderly women, but it now occurs in young people as well.

The researchers recruited 478 people with dry eye symptoms. All were using computers for at least three hours per day for at least one year. Subjects were randomly divided into either the group that received omega 3 supplements or the placebo group that received olive oil for three months. The amount of omega 3 supplements used in the study was equivalent to about 1.5 capsules of OMEGA+++.

Omega 3 fatty acid supplementation significantly reduced dry eye symptoms as measured by several standard eye tests. The results showed 70 percent of patients were totally symptom-free in contrast to 14.9 percent patients in the placebo group after three months. Although dry eye can be caused by many factors, which affect both tears and the eye surface, the researchers concluded that dietary consumption of omega-3s caused significant improvement in dry eye symptoms.

Why Does Deterioration in Vision Occur?

As we age, the blood supply to the eye becomes weaker. The retina is the back of the eye where the picture is taken, so to speak, and relayed to the brain. Omega 3 and omega 6 fatty acids support the blood vessels that feed the retina and build the nerve sheath of the optic nerve.

Practically every drugstore now carries an entire line of readers. Readers are the non-prescription eyeglasses that commonly range in magnification power from +1.0 to +3.0. The target consumer is the adult whose vision is deteriorating as a natural progression of aging.

What Can Delay Age-related Eye Conditions?

A study conducted by the National Eye Institute that evaluated the diet of 1,837 people over a 12-year period, showed that those who consumed more Omega 3 fatty acids in proper ratios had better vision and eye health.
OMEGA+++ contains the omega fatty acids 3, 6, 9 (EPA, DHA, and gamma linoleic acid) in the ratios found to be most effective. The supplement is also carefully formulated with quality fish oil, borage oil, fertilized avian egg extract, and micro-active CoQ10.

Dr. Steven Masley M.D., the author of 30 Day Heart Tune-Up , warns consumers that most American made fish oils contain rancid fats and are not high quality products. LifePharm elected a special South American fish, called the Engraulis Ringens, a member of the anchovy family that has the highest naturally occurring ratios of EPA and DHA of any fish species. In addition, omega 6 and 9 from borage oil, exported from the Mediterranean region, are of the highest quality.

OMEGA+++ supports circulatory health by helping to ensure optimal blood flow through blood vessels, to the brain and organs. Recent studies that show the benefits of consuming omega 3 and omega 6 fatty acids for eye health provide another reason for making OMEGA+++ a part of our daily regimen.