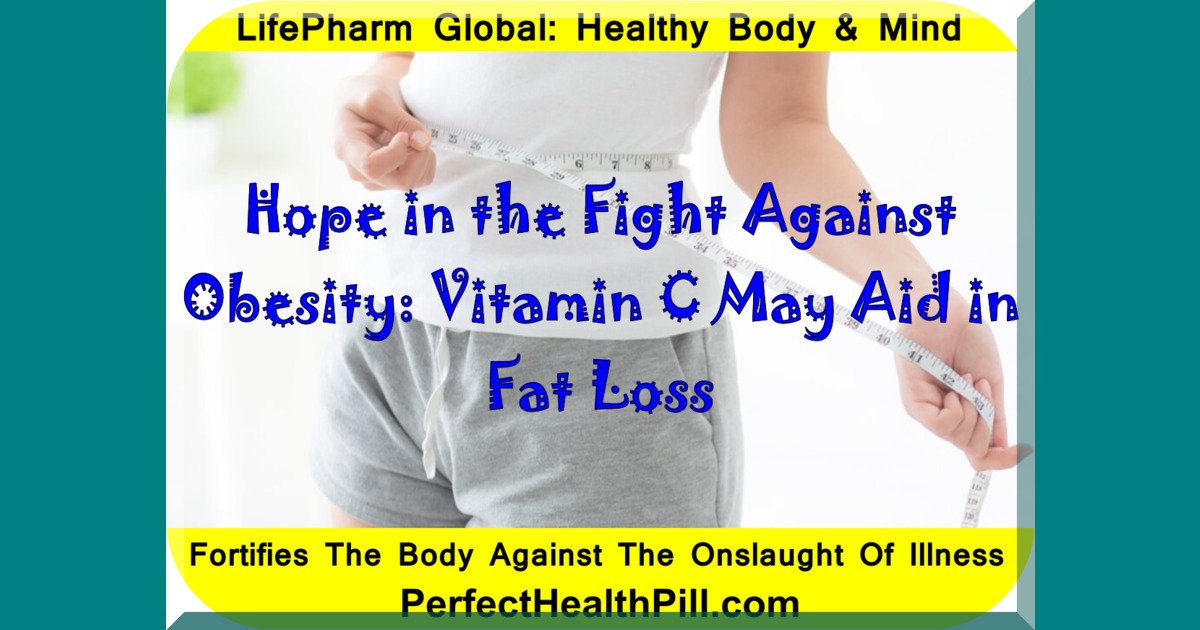 There can be multiple contributing factors involved in the outcome of obesity, and some of them are beyond an individual’s control. For example, there are genetic susceptibilities to obesity which are associated with genetic changes. These genetic changes affect biochemical pathways that regulate fat metabolism, energy expenditure or energy intake. This is an important and less recognized rationalism than the old standby of people are overweight because they eat too much and don’t exercise enough.

While diet and exercise certainly play a role, this is a one-size-fits-all way of thinking and an obtuse way of viewing the obesity epidemic. Additionally, it has been discovered that many of these biochemical pathways are also influenced by specific foods and nutrients, as reported by Dr. Carol Johnson, who has conducted numerous studies in the Journal of American College of Nutrition on the importance of having adequate amounts of vitamin C in the body.

Numerous studies have shown that despite sufficient calorie intake and food availability in countries such as the U.S.A., many young and older adults are not consuming adequate levels of vitamin C. This nutrient is utilized in hundreds of biochemical reactions throughout all the cells of the body; therefore, a deficiency can slow down or hinder numerous physiological pathways.

The discovery could provide supplementary answers on how to gain control over the global obesity problem. If vitamin C holds answers to eliminating fat storage, it could reverse many of the chronic metabolic abnormalities associated with obesity such as insulin resistance, dyslipidemia (high levels of harmful fats in the blood), and abnormal heart conditions.

Higher levels of circulating vitamin C levels were correlated with a lower body mass index as shown in the 1989 NHANES II study of 11,592 participants.

One study showed that vitamin C supplementation of three grams per day was associated with greater weight loss than a placebo after six weeks in 38 obese subjects who were given advice for a weight-loss diet, but not placed on a controlled diet.

Vitamin C is also a cofactor required for the biosynthesis of carnitine, a metabolite required for the transport of long chain fatty acids across the mitochondrial membrane for subsequent fat degradation and oxidation. Carnitine deficiency is associated with reduced fat oxidation and lipid accumulation in the muscle.

Adipose tissue, or fat, secretes a range of bioactive regulatory proteins called adipokines, which are essentially fat messengers, the major one of which is called adiponectin. This hormone is lower in obese subjects than in non-obese subjects.

As weight is lost and body mass returns to normal levels, inflammation is reduced and the production of adiponectin is restored to normal along with an average body mass index (BMI). Blood vessels are then improved in the liver, muscles and heart. In one study , weight loss was associated with a 13 percent rise in adiponectin.

It’s also been found that ingesting a combination of vinegar and peanuts can reduce the glycemic effect of a meal, a phenomenon that has been related to satiety and reduced food consumption. Thus, the effectiveness of regular exercise and a prudent diet for weight loss may be enhanced by attention to specific diet details such as vitamin C supplementation.

Get Your Vitamin C Boost with IMMUNE+++

LifePharm’s IMMUNE+++ contains the Life-C exclusive blend of pure vitamin C combined with citrus bioflavonoids and lipid metabolites. Life-C has two times more bioavailability and stays in the bloodstream twice as long as regular vitamin C to assist the body in the hundreds of biochemical reactions that need it to perform their functions.

Now we have the scientific evidence that vitamin C is also necessary for numerous reactions involving lipid and fat metabolism. You may oxidize up to 30 percent more fat during a moderate exercise bout than individuals with low vitamin C status. As you lose weight your body may produce more adiponectin (fat messengers), which will in turn support the health of liver, muscle and heart tissue. To support your optimal health, IMMUNE+++ also contains an array of specific bioflavonoids, berry extracts and the synchronistic blend of Adaptogenic mushrooms.