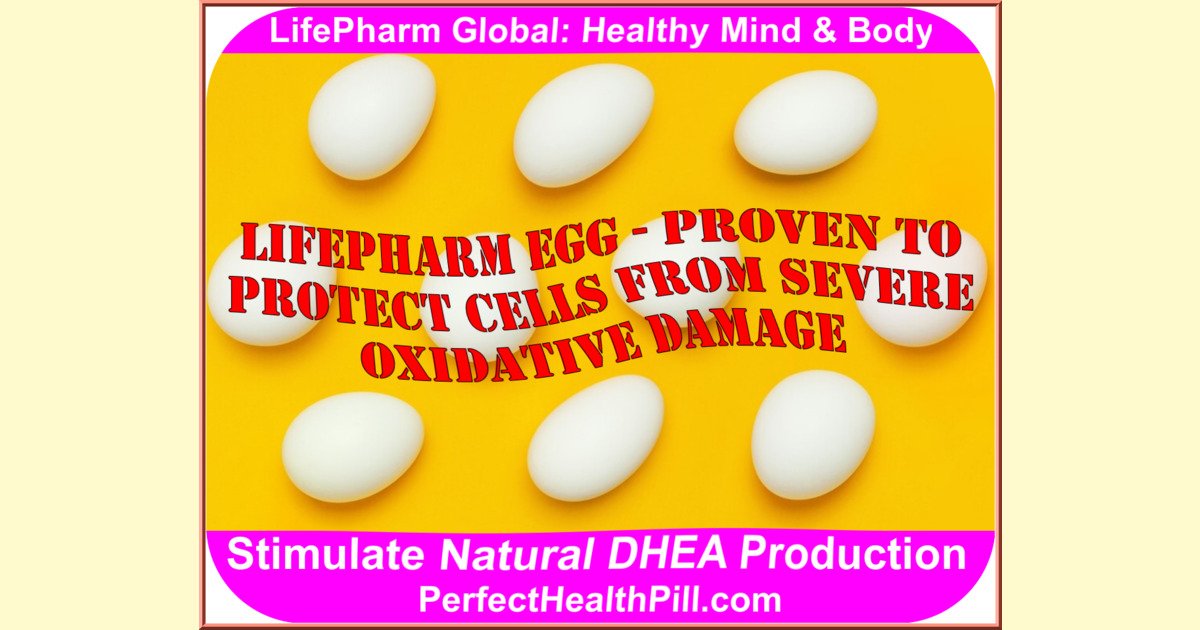 LAMININE is a proprietary formula of LifePharm built on the foundation of the early, fertilized, unprocessed avian egg extract. Unlike many other heated or chemically processed egg products, the fertilization of the LifePharm egg and its precise incubation time helps it retain its original active components.

Composed of a rich source of vital nutrients containing unique peptides, proteins, enzymes and bioactive growth factors, the LifePharm egg keeps active components in their natural state and functional. When blended with quality fish and vegetable proteins to round out the amino acid profile, LAMININE produces beneficial health effects. One of these health benefits is antioxidant protection.

LifePharm scientists recently connected with Dr. A. Hinek M.D., PhD, a human fibroblast cell scientist at the University of Toronto, who has expertise in techniques to evaluate growth factors and antioxidants.

The Connection Between Oxidative Stress and Antioxidants

Oxidative stress is hypothesized to be responsible for the onset and development of various diseases and aging. Dietary antioxidants are thought to impart potential benefits in reducing the risk of some chronic diseases because of the antioxidant functions. There is extensive research on the presence and characterization of antioxidants from fruits, vegetables, cereals and herbs; however, there is only limited research with regard to antioxidants from animal derived products.

Young, fertilized egg proteins (such as ovalbumin, ovotransferrin, phosvitin) are antioxidants. They also contain vitamin E, vitamin A, selenium and carotenoids, which are also reported to have antioxidant properties. However, domestic cooking tends to reduce the antioxidant activity of egg.

Phosphopeptides are small protein molecules that attach phosphorus (the second most profuse mineral in the human body). This helps them effectively bind calcium and iron, and inhibit formation of insoluble calcium phosphates or iron complexes. Therefore, phosphopeptides can increase calcium or iron bioavailability and prevent oxidation.

Phosvitin is one of the most important phosphopeptides, preserved in the LifePharm egg, and is considered the most phosphorylated protein found in nature. Phosvitin contains a much greater number of phosphates in the molecule than milk protein.

Too Much Iron and Copper from Food can be Harmful

Although iron and copper are nutrients essential to health, consuming too much of these elements in foods can be harmful. Excess free floating iron and copper can become oxidized and when they come in contact with cell membranes or other structures they cause severe damage.

Phosvitin is the best antioxidant to capture unattached iron and copper within the cell membrane. Phosvitin has also been shown to protect DNA against hydroxyl free radical damage. Because the phosvitin can attach to iron it can inhibit iron oxide formation. In one evaluation the antioxidant activity of phosvitin was significantly greater than that of vitamin E.

Recent research studies indicate that numerous and powerful antioxidants can be found in the LifePharm egg extract. The LifePharm proprietary egg contains a unique combination of growth factors, peptides and antioxidants not found in other plant or animal sources.

LAMININE further contains a complete profile of all the essential and non-essential amino acids in a natural, non-synthetic form. Shown to promote an overall sense of health and well-being, LAMININE has helped improve the lives of tens of thousands of people all over the world.